DID YOU KNOW that Congo is the #1 rape capital of the world? (According to online statistics in 2012)

DID YOU KNOW that 4 women are raped in Congo every 5 minutes?

DID YOU KNOW that one study shows Congo as being the least desirable place to live in the world AND Eastern Congo is said to be the most dangerous place in the world for women to live.

Many Congolese women have been brutally terrorized, tortured and gang-raped. Most of them have been purposely infected with HIV/AIDS. Some of them were brutalized beyond imagination during the attack that they are unable to walk because of the extensive injuries they have endured.

These rape victims are treated like modern-day lepers who are ostracized and driven out of the community to live in seclusion and rejection. They are innocent victims and yet they are openly called “garbage” and are rejected and disowned by their family, friends, community and country. They have no hope of getting a job or having a future; their terror will never be over.

Home of Hope has begun to help women in the city of Goma, Congo, but there are hundreds of women in need, women whose stories are devastating and horrific.

Our goal is to provide training in the areas such as HIV awareness, microloans, sewing classes, handbag manufacturing, Christian wholeness, inner healing and physical healing. We want these single mothers to become self-sustaining with a safe place to work, live and succeed.

WATCH THIS VIDEO OF THE TUMAINI PROJECT:

Home of Hope is helping these women in Goma, Congo.

HERE IS A VIDEO OF A SUCCESS STORY, SAKINA, A WOMAN IN THE TUMAINI PROJECT:

READ THIS BLOG ABOUT LOUISE (FEATURED IN THE VIDEO): 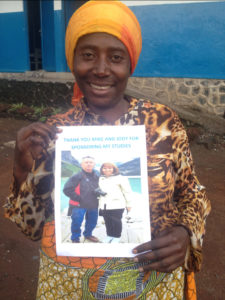